My Photograph of Michelle Obama on the Cover of NV Magazine

In October 2008 I went to a rally on the University of Colorado campus in Boulder to hear Michelle Obama speak. Although I was buried in the crowd I was able to take some photographs of her with my Nikon D80 and a 70-300mm zoom lens. A skate girl next to me let me stand on her skateboard for a few shots. She had to steady me because skateboards aren't really designed for this sort of thing. Later, I posted a couple of the photographs online. One of these became my most viewed photograph on Flickr. At the end of 2008 the photo was used with my permission on a First Ladies fashion website called Mrs. O. And then NV Magazine asked to use it as part of their "Michelle is Me" cover story, about Michelle Obama's impact on African-American women. 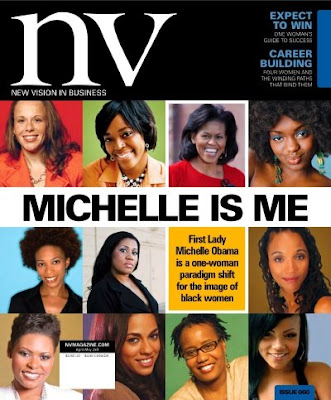 The original uncropped photo has blurry backs of people's heads along the bottom and right side. But I think Mrs. Obama's smile transcends the entire scene. 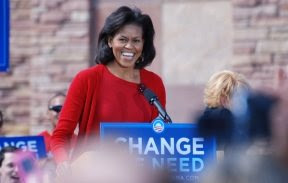 Since I took this photograph she has become a gracious and beautiful first lady.

NV - New Vision in Business Magazine is sold at many Barnes & Noble stores around the U.S. Thanks to Leah Bailey at NV Magazine.
Posted by Joe at 10:39 AM

Email ThisBlogThis!Share to TwitterShare to FacebookShare to Pinterest
Labels: Barack and Michelle Obama

I bet my wife, Cynthia, has this very photo in her extensive collection of Obama Pics!

Thanks for all the nice comments, everyone :)