October 5, 2007: They have begun tearing down the old Gates Rubber Factory buildings. The top photo shows the large north building, still there. The middle one shows the south building on its way down. The third photo shows a workman dismantling the bridge that joins the south and north buildings over Mississippi Avenue. Beneath that you can see some photographs I took in 2006. 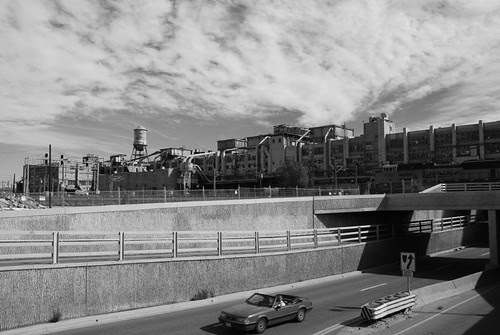 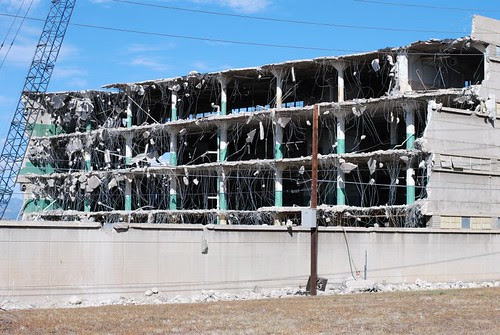 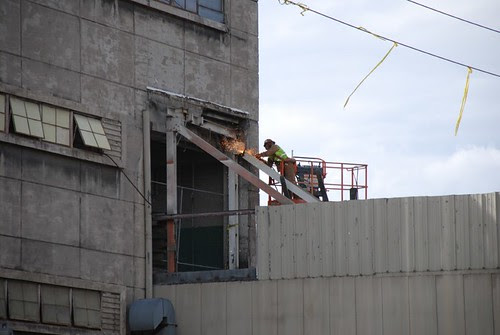 June 3, 2006: Today I went out to the old Gates Rubber Company buildings between Broadway and Santa Fe. They're going to be torn down soon so I thought I'd take some pictures before they turn this splendid eyesore into more urban sprawl. 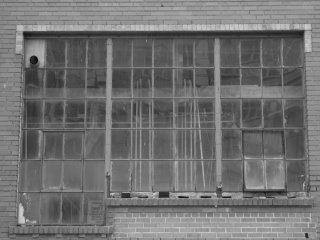 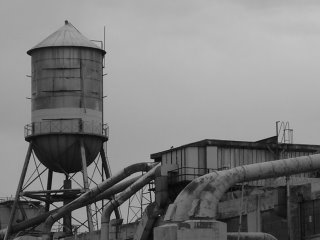 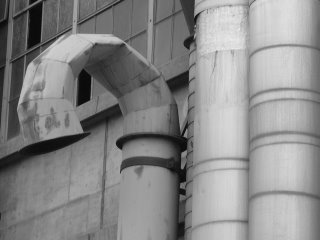 Email ThisBlogThis!Share to TwitterShare to FacebookShare to Pinterest
Labels: Buildings

Gates is one of the few Denver landmarks still around. Amazingly enough given all the EPA regulations and everything. I had the pleasure of being born in Denver and living there most of my 50 years of life, so far. I remember when Hampden and Havana didn't connect and we would four-wheel drive with the prairie dogs on the west side of the dam. I also remember when East Iliff didn't exist. Evans ended on the east side and then there were farms. Beautiful countryside and open spaces. I remember driving to Louisville to eat at the Blue Parrot restaurant and it felt like it took all day to get there.
And this just been since the 1960's. Denver is a wonderful city, but like every other forward-moving metropolis, it too has changed. I am ever so grateful for the childhood I had there, living in the south part of Denver near DU and University Park and being able to play in the street with my friends and not worrying about a car killing you. Thank you Denver for spectacular memories.

It is very sad for me to see this icon of industry being demolished, even though I know it is environmently necessary. I worked for Gates Rubber in 1969 (I was 19 yrs. old) and I can still remember how HOT it was in that building! I did what at that time was called a "skiver", shaving down the rubber on certain items. I lived in Colorado on and off over the years and every time I came back I had to go to Denver to reminisce at Gates.

Gates Rubber Company was a Company very much respected by my family. My Father worked there for 30 years. When I graduated from high school in 1973, I worked for in the braided hose division with my father until I joined the Navy. As A kid, I loved living in Denver, as it was smaller and alot of open spaces. The Gates family took care of gates employees with Christmas Parties, Employee day at Lakeside amusement Park, and in the 1950s had athletic competions such as boxing and baseball between gates employees. Sure will miss seeing Gates Rubber Company on Broadway and Mississpi.