Tegan's Fingers and the Art of Cropping

When taking pictures I usually try to get the shot I want without thinking about later adjustments or cropping. In the digital world we live in it's easy to take a photograph and possibly improve on it with Photoshop and other programs. But I live in the natural world too and I prefer to just leave things alone. Of course my Nikon D80 is a digital thing, but really all it does it capture light on a sensor according to the way I set the camera. I would prefer that it capture the light as naturally as possible. And this approach also includes the composition of the picture. This feels natural to me, whether it really is or not.

At the Tegan and Sara show I saw in Aspen in April, I wasn't able to get close enough to the stage to get the shots I really wanted. And there were a lot of people between me and the band. So I later spent some time cropping the photographs to get better views. This has helped me to see into the pictures more and I found some interesting details. 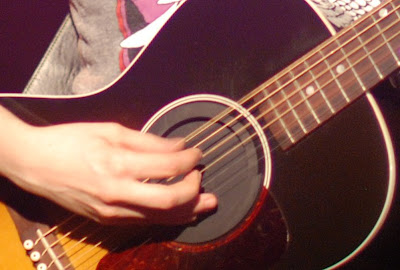 I cropped one to show this close-up of Tegan's guitar. It's not really a great picture -- it's a bit too blurry maybe -- but I like the way the guitar strings seem to vibrate under Tegan's fingers. This is something you really don't notice when looking at the entire photograph.

Here is the original photograph before cropping. You can click on either one to see a larger view. 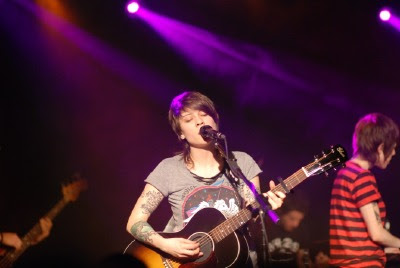 Another crop from the same original is at Flickr here: Tegan Quin of Tegan and Sara on Flickr.

Recently I watched the Beatles 1965 movie Help, which has a number of scenes showing the Beatles miming to various songs. These sequences influenced later music promo films, especially MTV video clips. Some of them include close-up shots of the Beatles playing their instruments, showing fingers on strings. I guess this could be called "finger syncing." As a non-musician I've often been fascinated watching musicians play their instruments, especially with the way their fingers touch guitar strings or the keys of a saxophone or piano, or hold drumsticks. I tried to capture that idea here. In a natural yet digital kind of way...
Posted by Joe at 11:53 AM

Email ThisBlogThis!Share to TwitterShare to FacebookShare to Pinterest
Labels: Musicians, Natural and Digital

overall, the shot, both cropped and not, is great. i'm wicked jealous that you got such great pictures. i've never had the opportunity to try my camera out at one of thier shows:( i love the details in the little things...

keep up the good work!

I really like the original pic along with the 2 cropped photos!! You're right, when you look at the original pic, you don't really notice the strings vibrating. Most people would just look at Tegan herself and not what is actually going on in the pic. Truly nice!!

Thanks for sharing with me Joe!