In 1986 I photographed one of my favorite bands, Wednesday Week, at a place called the Belly Up Tavern in Solana Beach, California, which is on the coast between Los Angeles and San Diego. I prefer taking pictures of bands using whatever stage light there is in the club. Back then I had a Pentax ME Super and I didn't even own a flash unit for it. But the Belly Up Tavern lights just weren't quite right. Wednesday Week's lead singer, Kristi Callan, also had a Pentax camera, and loaned me her flash, which I used for these pictures. Kristi is currently in a cool band called Dime Box Band. That's when she's not pretending to be Robin Zander.

On this California trip I was staying in Hollywood with two friends, Curtis and Marsha Hawkins. Curtis worked for A&M Records and Marsha worked at a photo lab. She had the film processed for me and made the contact sheet you see here (click on it to see a larger version). 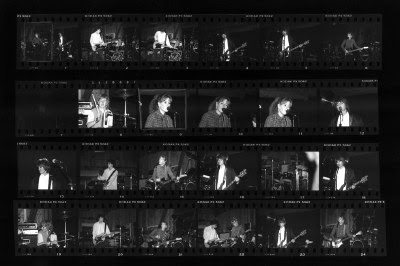 In 2001 I put some of my Wednesday Week photos online. I recently updated and moved the website. While looking through some old photos of the band I came upon this contact sheet and decided to scan it. It had to clean it up a bit, but I think the scan came out pretty well.

So I guess digital has almost wiped away our beloved analog contact sheets. I suppose you could make one with a graphics program, but that would be cheating. Another reason to pine for the days of film in this new photographic world of camera phones, too much Photoshop and HDR.
Posted by Joe at 11:21 PM